Friends, be cautious with those that will use the facts of your life to justify their wickedness. Therefore, if anyone is in Christ, the new creation has come: The old has gone, the new is here!- 2 Corinthians 5:17  You my friend, have been transformed, you are bearing fruit and your fruit is abiding. You are growing and having impact in your sphere of influence. You are standing for truth, justice, and dignity of others. You are upholding sound doctrine, rebuking evil, a shining light in darkness, a voice for the voiceless and walking uprightly minding the business of the Holy Spirit. You have just become a target for Satan. Oh! How He will rise up against you and bring up your past against you. If you do not stand right before God, you will cringe before Satan.

Paul and Silas are Jews quite alright and were Romans citizen also. However, I want to direct your attention to Act 16:16 -19. They stood against divination which the Lord was against. Those profiting by it brought up allegations that as Jews they have come to impose Jewish custom on Romans. The wicked will manipulatively use something in your past, the facts of your life to justify to perpetrate evil against you.

Act 16:16 Once when we were going to the place of prayer, we were met by a female slave who had a spirit by which she predicted the future. She earned a great deal of money for her owners by fortune-telling. 17 She followed Paul and the rest of us, shouting, “These men are servants of the Most High God, who are telling you the way to be saved.” 18 She kept this up for many days. Finally Paul became so annoyed that he turned around and said to the spirit, “In the name of Jesus Christ I command you to come out of her!” At that moment the spirit left her.

19 When her owners realized that their hope of making money was gone, they seized Paul and Silas and dragged them into the marketplace to face the authorities. 20 They brought them before the magistrates and said, “These men are Jews, and are throwing our city into an uproar 21 by advocating customs unlawful for us Romans to accept or practice.” 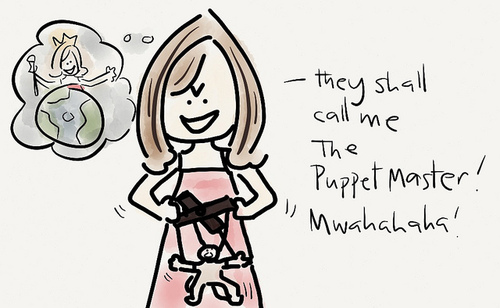 You will be lied against, accused, oppressed and denied your right to freely be and participate in rendering service where you have been planted. Your accuser will unabashedly without remorse spread evil report to solicit support from all and sundry. You have to resist! Vehemently stand, unwavering in your faith, prayerfully trusting God for help, without which the wicked will succeed in tarnishing your good name. You must not permit that for if you do not stand for truth and justice, you are standing for evil. There is no middle ground.

Come to think of it, the people of the city had not yet encounter Paul and Silas but this guy was able to persuade them to rise up against Paul and Silas! How many Saints have you been manipulated to ill treat? How many have you manipulated others to kill? When you spread evil/slander about someone, you are killing their character.

Father Lord Almighty, we ask that you will forgive us this day our trespasses even as we forgive those who trespass against us, lead us not into temptation but deliver us from all evil we pray in Christ Jesus mighty name. Amen