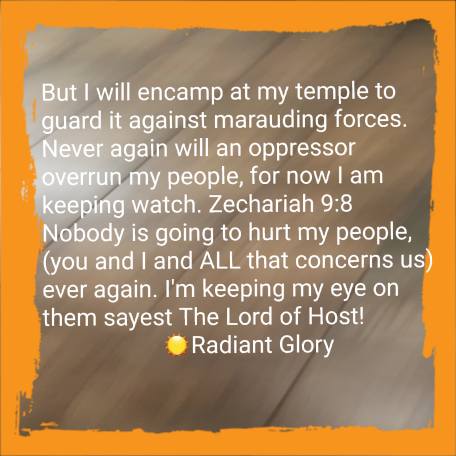 Zechariah 12: A prophecy: The word of the Lord concerning Israel. Concerning You And I.

The Lord, who stretches out the heavens, who lays the foundation of the earth, and who forms the human spirit within a person, declares:2 “I am going to make Jerusalem a cup that sends all the surrounding peoples reeling. Judah will be besieged as well as Jerusalem. 3 On that day, when all the nations of the earth are gathered against her, I will make Jerusalem an immovable rock for all the nations. All who try to move it will injure themselves. 4 On that day I will strike every horse with panic and its rider with madness,” declares the Lord. “I will keep a watchful eye over Judah, but I will blind all the horses of the nations.5 Then the clans of Judah will say in their hearts, ‘The people of Jerusalem are strong, because the Lord Almighty is their God.’

6 “On that day I will make the clans of Judah like a fire pot in a woodpile, like a flaming torch among sheaves. They will consume all the surrounding peoples right and left, but Jerusalem will remain intact in her place.

7 “The Lord will save the dwellings of Judah first, so that the honor of the house of David and of Jerusalem’s inhabitants may not be greater than that of Judah. 8 On that day the Lord will shield those who live in Jerusalem, so that the feeblest among them will be like David, and the house of David will be like God, like the angel of the Lord going before them. 9 On that day I will set out to destroy all the nations that attack Jerusalem.

Friends, the Lord is faithful that promised. Never again will an oppressor overrun you, the Lord will fight against all that fights against you. The Lord is your shield, He will not let it be unto you according to the desires of the wicked. The Most High God will defend you. As many as rise up against you will fall for your sake. The serpent will bite its own tail. Trust ye in the Lord for your safety is in Him alone. The blood of Jesus Christ speaks still!!!!!

1 The Lord is my shepherd, I lack nothing.
2 He makes me lie down in green pastures,
he leads me beside quiet waters,
3 he refreshes my soul.
He guides me along the right paths
for his name’s sake.
4 Even though I walk
through the darkest valley,
I will fear no evil,
for you are with me;
your rod and your staff,
they comfort me.
5 You prepare a table before me
in the presence of my enemies.
You anoint my head with oil;
my cup overflows.
6 Surely your goodness and love will follow me
all the days of my life,
and I will dwell in the house of the Lord
forever.

1 Hear me, Lord, my plea is just; listen to my cry.
Hear my prayer— it does not rise from deceitful lips.
2 Let my vindication come from you; may your eyes see what is right.
3 Though you probe my heart, though you examine me at night and test me,
you will find that I have planned no evil; my mouth has not transgressed.
4 Though people tried to bribe me,I have kept myself from the ways of the violent
through what your lips have commanded.
5 My steps have held to your paths; my feet have not stumbled.
6 I call on you, my God, for you will answer me; turn your ear to me and hear my prayer.
7 Show me the wonders of your great love, you who save by your right hand
those who take refuge in you from their foes.
8 Keep me as the apple of your eye; hide me in the shadow of your wings
9 from the wicked who are out to destroy me, from my mortal enemies who surround me.

Through you Oh Lord my heart sings I am free

I am free to live for you Lord

I know the Son has set me free

A shinning light of love that shatters every form of darkness