It has been said to me:

These are just a few of what the Lord has said concerning Joan. What has been said to you friends? 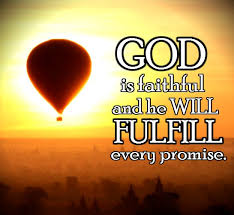 Without weakening in his faith, Father Abraham faced the fact that his body was as good as dead- since he was about a hundred years old – and Mother Sarah’s womb was also dead. Yet He did not waver through unbelief regarding the promise of God, but was strengthened in his faith and gave glory to God and being fully persuaded that God had power to do what he had promised. Romans 4:19:21

Friends, hope against hope, believing that every word written in the scripture that you have received into your spirit is a promise from God and it will be fulfilled if you believe. Trust God!

One thought on “What Has The Lord Said? To You!”